Video games use a visual language for guiding players through the virtual worlds that they embody. For example, a player might see a blinking arrow to tell him/her which way to move his/her avatar through the game – something we call a visual interaction cue. This paper attempted to document this visual language, categorizing the different purposes these cues are designed for, how they are presented within a video game, and also how they are activated. Our idea was to use this to inspire designs for new augmented reality systems as they become more popular.

Our data collection process took us across a bunch of different genres of games, where the crucial purpose was to identify and document different specific examples of visual interaction cues. We spent a long time discussion, organizing, tearing apart, and reorganizing the categories. Ultimately, we landed on a three-axis framework for describing each visual interaction cue we found: purpose, markedness, and trigger.

Markedness was broken into four categories: subtle, where the cue blends into the environment or visual scene seamlessly; emphasized, where the object or surface is highlighted; integrated, where a virtual object (e.g. a 3D arrow) is added to the viewport of the player, and tracks the object; and overlaid, where virtual objects are added atop the viewport, that don’t track the view.

Finally, trigger was broken down into what actually caused the visual trigger.

My favourite image from the paper illustrates the different cues pretty well: 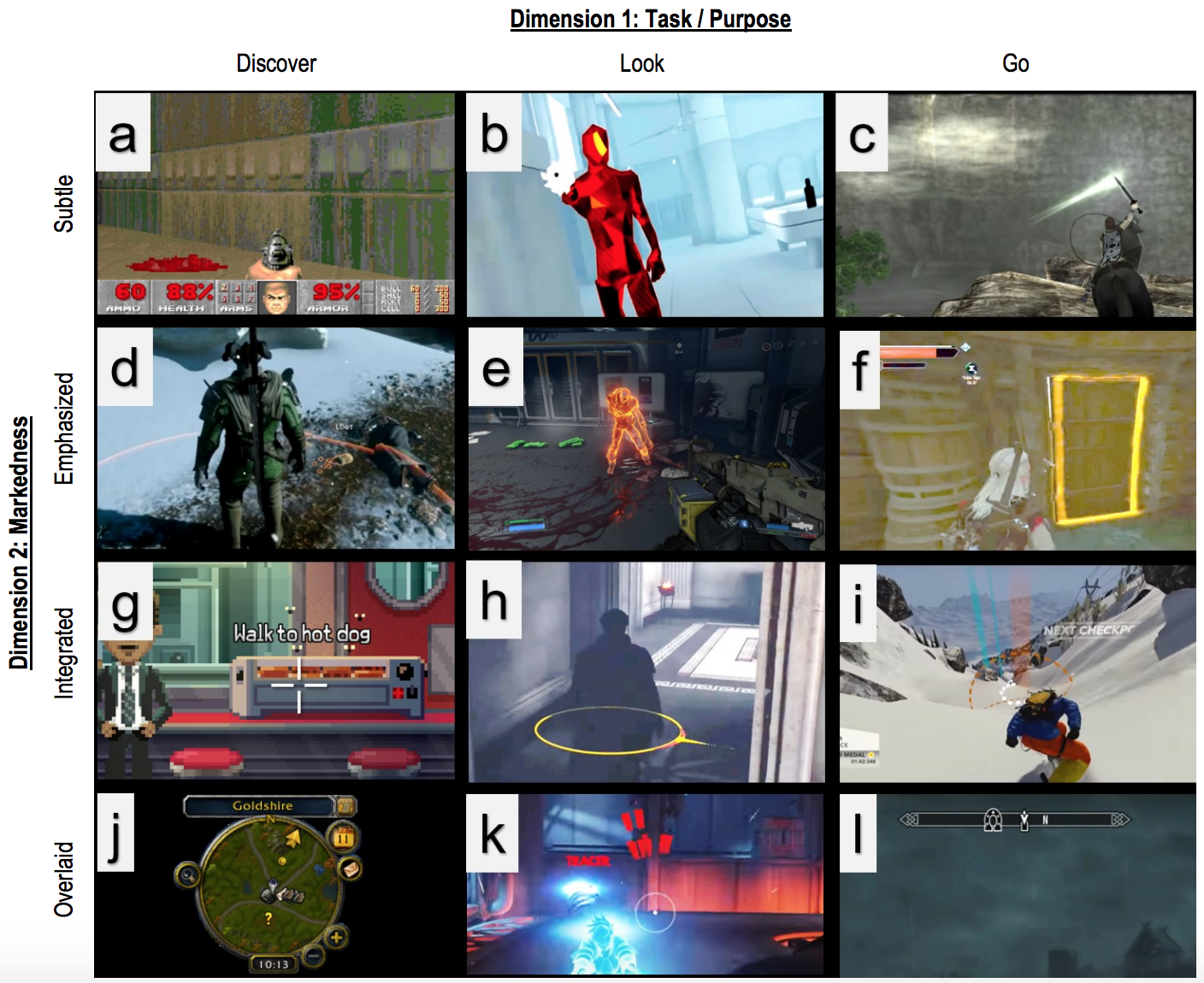 While it is probably exhausting to read the above, note that each layer or column of the table is meaningful. Each column shows cues with similar purpose (either to help the player to discover interactable objects, observe timed events, or where to go). Similarly, each row shows a different visual way in which the cues are presented.

I was excited not only to help develop this framework, but also to think about how these cues can be used for the design of future AR systems. Up up and away!

For more information, take a look at:

Reflection: For me, this was a total passion project. I love the idea of going into worlds that I know and love (i.e. video games), where people have sort of developed a “lore” or “way” of doing things (either consciously or unconsciously), and trying to document this in a way that is useful for something else. Kody’s MSc project had originally began with concrete instantiations of these ideas, but after a time, we realized we needed a more grounded approach for thinking about these cues. Thus, the project was born. Amazingly fun.